First, I want to start this article with a heartbreaking truth. My childhood has been ruined! So now I must pass this devasting truth onto you. While doing research for this article I found out that contrary to popular belief, George Washington did in fact not have wooden teeth. I know, I know, this changes everything. But we must remain strong, and fear not because everything else I’m about to write is true and a lot crazier than George Washington wearing wooden dental dentures. 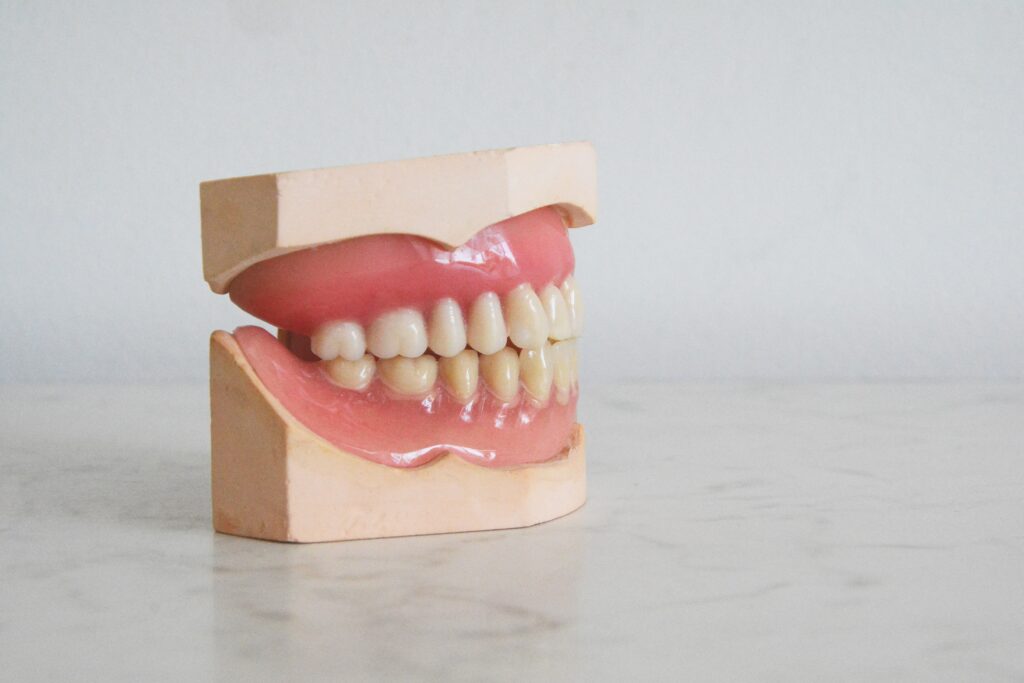 As of this writing the oldest dentures ever recorded date back to around 2500 BC and were found in Mexico. It is absolutely insane to think that ancient people were thinking about dentures and ways to replace lost teeth. The fact that they were able to create dentures with creativity and ingenuity using only the things found in nature is mind blowing.

And no this isn’t evidence of ancient aliens helping mankind! Excavators estimate that the dentures were made of wolf’s teeth, specifically, wolf molars. It is believed that they placed the animal teeth directly into the empty sockets of a person’s missing teeth.

The ancient Egyptians didn’t use wolf teeth to replace their missing teeth. Instead, they collected human teeth and fashioned them together using gold wire.

Known as Etruscans, they were famous for their advances in medicine and science. They combined techniques of the ancient Mexicans and Egyptians. They used gold wire to hold the new teeth in place, these teeth were from other humans or animals.

Now that I think about it, it makes more sense. Many ancient civilizations didn’t like to waste any part of an animal. And If grandpa needs teeth, then hey why not try recycling the teeth of the animal we just finished eating. Or maybe we can use Uncle Bobby’s teeth since he just passed away and won’t be needing them.

Finally, wooden dentures come into existence! These wooden dentures were made by taking softened beeswax and making an impression of the person’s teeth. Afterwards, an artisan would hand carve teeth to match the impression, and then set the new teeth on a soft mouth guard made of beeswax.

So, what were Washington’s teeth made from? First, you should know that throughout his lifetime Washington had 4 sets of dentures. In fact, he started losing his teeth as a young man. Probably due to poor genetics, poor diet, and dental decease. One of the four dentures is in a museum. The denture includes teeth from both humans and animals, believed to be horse or cow teeth, that were filed down to human size.

It is believed that some of his dentures were stained and made them look like wooden teeth. Also, wooden teeth were still being used in Japan Around this time. This is probably where the myth stems from. It’s pretty impressive to think that even with his oral health issues, he was still able to become the greatest General in The Civil War, and his peers elected him as the 1st President of the newly formed United States.

In 1774 Alex Duchateau created the first porcelain dentures. They were great but were too brittle. He ended up creating a harder porcelain, but these dentures were expensive and not affordable to the general public.

In the 1800’s, Claudius Ash created dentures with hard rubber and vulcanite. His company, Ash & Sons, dominated the industry until 20th Century when Acrylic dentures became the better option. It was more affordable and easier to manufacture.

Today dental dentures are made using a blend of acrylic resin, metal, and sometimes porcelain.

When you think of dentures, you probably wouldn’t think that they’ve been around for thousands of years in one form or another. Our ancestors had it rough though. But they were smart, and it doesn’t matter how they lost their teeth, they realized the importance of being able to have teeth to chew their foods and for aesthetic reason too, I’m sure.

Today, there are many ways to prevent tooth loss and even if you have lost teeth our dentures are a thousand times better than the dentures our ancestors made. Santa Clarita Advanced Dentistry can restore your beautiful smile! Whether you need partial dentures or complete dentures, give us a call for any of your dental needs, big or small.

In our next Article we’re going to talk about Dr. Allen. The Doctor makes custom dentures right in our practice. You will be hard-pressed to find another Dentist who has been making dental dentures since he was 9 years old!