It looks like you guys want to know, what is the best gum for teeth? Not to worry fellow people of the internet! We have asked the pros (dentists), done our research, and are now ready to present you with the answers you deserve.

Oooh gum, sometimes we hate it! It can end up in our hair, other times it ends up on the bottom of our shoes. Then we look like weirdos trying to get rid of it in an incognito type of way, but that rarely works. Have you ever had gum melt inside one of your jean pockets? Take my word for it, it’s one of the worst things that can happen to you. Especially if your pockets are a place you like to carry your hands in. Despite these nightmarish scenarios, we love gum! Even if it doesn’t always love us.

Chewing substances for fun and/or oral hygiene, goes back to many ancient civilizations. But gum as we know it today comes from the Aztecs and Mayans. If you have ever been to Mexico, you may have seen little kids selling candies and other items. You may have heard them yelling “Chicle’s! Chicle’s!”, that’s Spanish for gum. Chiclets is one of the original gums and gum companies and is widely popular in Mexico. Chicle comes from a tree native to Mexico.

So how did gum come to America? Here’s the interesting and strange true story. Santa Anna, a Mexican politician and general, who helped overthrow Spain and bring independence to Mexico, is responsible for bringing gum to the USA. Santa Anna was a dictator for 22 years. He was a war hero who ultimately ended up losing Texas in a revolution, and half the Mexican territory in the Mexican American War.

This led him to be exiled to the U.S. His plan was to sell chicle as an affordable substitute for rubber. He wanted to use the profits to fund a new army and conquer Mexico City. He sold this idea to inventor, Thomas Adams. Adams bought chicle from Santa Anna but was unsuccessful in using chicle to replace rubber.

Adams’s son, Horatio, realized he could make a chewable product. Adams and his son would end up patenting a machine used to create gum, and the rest as they say is history. 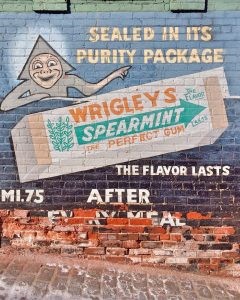 Great so now we know a little bit about gum’s history. What about it’s ingredients? Well, as stated above, gum was made using chicle, with added flavor. However, after World War 2, chemist learned how to create artificial gum bases to replace chicle. This made it more affordable to manufacture. The common ingredients in gum are a gum base, sweeteners, flavoring agents, and food-grade colors.

The sweeteners used in gums are the following three. Nutritive sweeteners, AKA regular sugars are the first option. Second, sugar alcohols, used to provide sweetness without the calories. Lastly, “intense sweeteners” such as aspartame are used. Aspartame is a synthetic sweetener that is calorie free and provides a higher concentration of sweetness compared to the other two.

Regular sugars are bad for chewing gum because sugar is bad for your teeth and can lead to cavities. Aspartame is controversial because it’s synthetic, meaning there has to be a natural alternative. That leaves us with? With? You guessed it! Sugar alcohols, more specifically xylitol.

Xylitol is found in small amounts in many fruits and vegetables and is therefore considered natural. Humans even produce small quantities of it via normal metabolism. It is a common ingredient in candy, mints, gums, diabetes-friendly food, and oral care products. Many dentists recommend using xylitol-sweetened gum. Xylitol boosts dental health and helps against tooth decay. In a separate article we will discuss the benefits of xylitol at greater length.

So, What Is the Best Gum for Teeth?

Gums that have xylitol are the best gums for your teeth. There are a few big brands that have xylitol as an ingredient. Be sure to check the ingredients before you purchase as ingredients can change. Some of the big-name brands you can find in most stores and gas stations are Trident sugar free gum, and Orbit sugar free gum. Other than that, you’re going to have to go online or to stores like Whole Foods that offer healthy alternatives. The good news is that currently there are many choices when it comes to gums using xylitol. Here are some other gums:

That concludes our article. It looks like we have to say goodbye for now! We hope this article was informative. We are happy to answer you dental related questions. If you are in Santa Clarita and need a great dentist, give us a visit here.